First released in August 2017, The Star Tarot proved to be a popular deck with readers of all levels. Three years on, the second edition of this beautiful tarot deck has recently been released and I was lucky enough to be selected to receive a copy of this divine deck, along with a drawstring bag in which to store my cards to review and to feature upon this here blog.

Designed and created by Cathy McClelland, a freelance illustrator designer, art director, and muralist based in Lake Tahoe.

Cathy has always had a fascination for symbolism, nature and the mysteries of life and beyond. The Tarot system seemed to merge these ideas together and as Cathy became more familiar with the imagery featured within Tarot, she felt captivated by the parallels between the Tarot symbolism and the lessons within the cycles of spiritual and naturalistic evolution.

In 1991 Cathy decided to paint her own Tarot images which would become part of The Star Tarot Deck, a name inspired by Cathy’s love of the cosmos. She first began by painting ‘The Fool’ and slowly over time she began piecing together the major arcana of the deck, taking lengthy breaks in between each of her pieces.

Cathy first published her ‘majors-only’ deck and booklet in 2008 which led her upon a journey where she met Mary Greer, who introduced her to the wider world of Tarot. Following an interest in her work, Cathy continued to work upon further artwork, eventually completing the full (major and minor arcana) deck by 2017.

Cathy’s work and imagery were inspired by meditation, long walks in the woods, nature, her study of the Tarot and spiritual subjects, as well as the influence of different cultural symbols and myths. She drew inspiration from nature, life, and the mysteries of the universe to complete her magical deck, The Star Tarot.

The 2nd Edition Star Tarot arrives packaged within a silky smooth, sturdy navy and gold cardboard, magnetic-close box. Inside the box are a comprehensive guidebook and the deck, which is seated within a cardboard guide.

Given that this is a rather large box for storage, I was very lucky to also receive a purpose-made, matching bag for The Star Tarot from Schiffer to include within this review. Whilst this bag is not included within the deck, bags are available to purchase separately should you wish to keep your deck securely and neatly stored.

The 2nd Edition Star Tarot guidebook is a colour-printed, comprehensive, lengthy read featuring a cosmically complimentary foreword written by Mary K Greer, an explanatory preface, a double-page spread upon each of the major arcana cards, a double-page spread (split into numerical order rather than suits) for each of the minor arcana cards and court cards, an extensive guide upon how to find your lifetime birthday personality and soul card, a separate guide upon how to determine your yearly growth symbol, and three example spreads which readers may wish to make use of.

I rather like that each of the cards is clearly identified within the text as a smaller, colour copy of the images from the cards is included, this makes it really easy to flick through and to quickly find precisely what you are searching for. 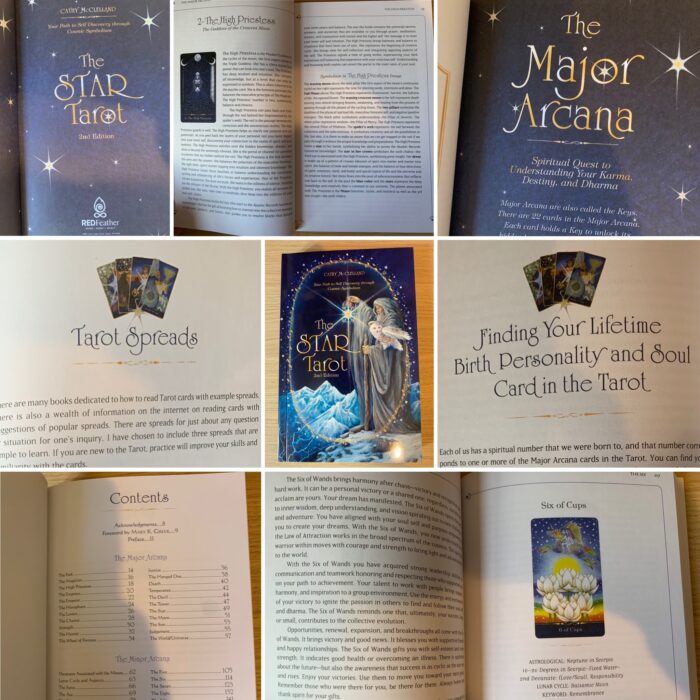 Featuring beautiful gold gilding, The 2nd Edition Star Tarot is a large, high-quality, silky smooth deck that feels lovely to shuffle. The 2nd Edition Star Tarot features a navy base strip with a clear, white font identifying the name and number of each and every card. The cards and imagery are large, bold, bright, and beautiful which seems stark and fresh against the navy theme which runs throughout the deck.

Reading With The Star Tarot

Having spent the past few days reading with The 2nd Edition Star Tarot, I have developed a deep appreciation for the naturalistic, mystical images featured within this magical deck. I love how despite the deck following a navy and gold, ‘moons and stars’ theme the cards still feature bright imagery creating a wonderful contrast balancing darkness and light.

Said to be ‘the path to self-discovery through cosmic symbolism, The 2nd Edition Star Tarot links the concepts of numerology and astrology to the major arcana in order to reference lifetime personality traits.

Cathy McClelland has stuck closely to the traditional tarot system, keeping the four traditional suits: ‘The Wands, The Cups, The Swords, and The Pentacles. However, Cathy has altered the naming of the court cards slightly as Pages/ Knaves are known as Princes or Princesses, whereas Knights, Queens, and Kings remain the same.

Here is a short video-walkthrough guide that I have put together further explaining The second edition of The Star Tarot.

The 2nd Edition Star Tarot is available to purchase directly from Schiffer for $34.99 or alternatively, UK customers may purchase this deck online via Gazelle Book Services for £33.99.

The Star Tarot drawstring bags are available to purchase directly from  Schiffer Publishing for $14.99. However, if you are in the UK, it is probably easier (due to shipping) to purchase from Gazelle Book Services for £14.99. You can also pick up one of these beautiful bags from the likes of Book Depository who are currently (as of October 2020) selling The Star Tarot drawstring pouches/ bags for only £14.75 though prices do fluctuate, especially due to the current pandemic.

The 2nd Edition Star Tarot is a beautiful, refreshing ‘second-take’ on a cosmic classic – I love how this deck links closely to numerology and astrology and feel that with the aid of the guidebook I have been able to delve deeper and discover information (such as my birth personality and soul card within a deck) which is something I have never done before now.

The guidebook is a chunky, comprehensive manual for new readers and a great read for those who have spent years reading the tarot and wish to look further into the likes of astrology, numerology, and lunar links within readings.

The 2nd Edition Star Tarot is a divine deck to work with and to read from, which I would thoroughly recommend for readers of all levels as it an enjoyable, inspiring, and divine, multi-divinatory deck.

Disclosure: I was sent the above product for the purpose of this post however all opinions are my own.

Shuffling Through The Eternal Seeker Oracle

Reading & Reviewing The Tarot of the Kingdoms